Although I have been more concerned recently with malware delivery tricks, a traditional spam message came through today that really irritated me. I think it claims to sell some kind of medicinal supplement, but it doesn't really matter. The point is that it is predicated on an enormous lie ("Letterman Returns To The Late Show") to trick recipients into clicking on the links:

Subject: EAT THIS, Ace any Test 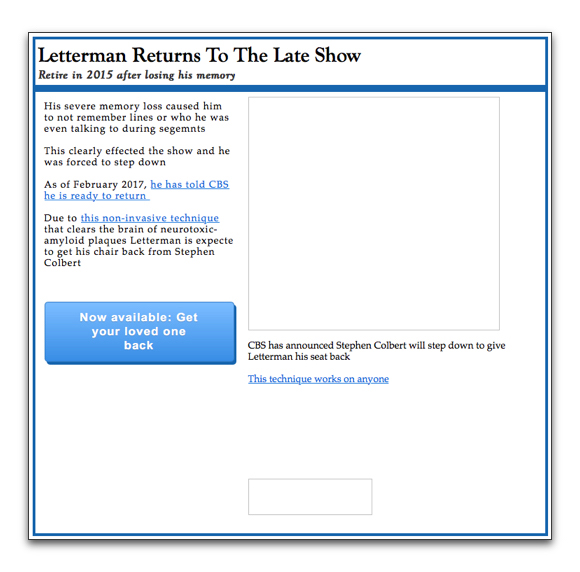 I didn't download the images sourced for the message because inspection of the HTML source code reveals that it includes the old "beacon" trick of retrieving images whose URLs contain potential identifiers of the email address used to deliver the message (i.e., they're the same as URL suffixes in the active links). Presumably, there is a photo of David Letterman at his old Late Show desk to substantiate the message's claim that he's going to come back to his old show and replace Stephen Colbert. Most readers will likely not see the couple of typos in the message body, and certainly won't notice the invisible hash-busting text embedded in the message.

Of course, the bigger problem is that you don't really know what's at the end of any of the links in the message unless you do some in-depth, safe poking around the Internet. It could be a malware delivery vehicle. When a URL bears a potential recipient identifier (in this case, a lengthy gobbledygook, non-base64-encoded string of characters), I don't like to signal to any server that a human received the message. And definitely not this human.

In this era of fake this and fake that, you must summon every ounce of self control to not click on unsolicited, preposterous messages, texts, and social media postings.