The term "amateur hour" is commonly used today to describe an attempt to appear professional, but failing to make the grade in a face-plant kind of way. Such is the attempt of a 419 advance-fee scammer whose email came my way today. Unlike the more typical 419er, this guy went a few steps further to build out the story behind his scam, including building a custom web site trying to be that of the financial institution where the pot o' gold is (not) being held.

Let's start with the email message:

From: wilsonbongani_financier@[removed].mn
Subject: THIS MESSAGE IS NOT SPAM IS FROM SALAM SECURITY DEPOSIT BANK SOUTH AFRICA (REPLY URGENTLY)

I the undersign Mr. Wilson Bongani the accountant officer to late Mr. Tarek Muhammad Aldaghdadi, the citizen of Saudi Arabia the contractor, who perished in a plane crash ( Concorde Air Flight Af4590) with the whole passengers aboard on 15-Oct-2008. And for your perusal you can view this wesite:
http://news.bbc.co.uk/1/hi/world/europe/859479.stm

Final meeting held on 20th of September 2011with our Bank and South Africa legislature representatives Dr. James Henry, Agreed that after this year 2011 if nobody come up for the claim of Late Mr. Aldaghdadi funds South Africa Government will take over the funds on 20th January 2012 based on Art 47.2 1993 of the penal code of Gauteng High court.

As per South Africa Government legislature all assets from deceased party who does not possess a (will) we be taken over by the South Africa Government after 4 years if not claimed by direct bloody or relative relations/business partner or next of kin. I write to inform you that the Bank authorized me to look for his business partner/next of kin for the inheritance of US $4.800,000.00 ( Four Million Eight Hundred Thousand United States Dollars) deposited with our Salam Security Deposit Bank here in South Africa.

In view of this I got your contact through a trade journal and I have agreed to give you 50% of the total of the money if you can handle this transaction in ultimate sincerity and secrecy. upon the receipt of your response, I will tell you the next step to take and I will not fail to bring to your notice that this business is risk free and that you should not entertain any fear as all modalities for fund transfer can be finalized within five working days, after you apply to the bank as a business partner to the deceased.

He starts off on the wrong foot in the Subject: line of the message, as I've written previously.

Endemic to this type of scam appeal are the reference to a real-life tragedy (complete with BBC news clip from July 2000, not October 2008, doofus) and the frequently clumsy language (a poorly worded reference to a "bloody relative" is my favorite).

I was curious about the link to Salam Security Deposit Bank. Of course I've never heard of the outfit, but that doesn't mean it might not exist. It's typical of a 419er claiming to represent a financial institution to hijack the good name (and address, but not telephone number) of a real bank. After checking the site for safety, I viewed it in a browser. Here are some sample pages from the site: 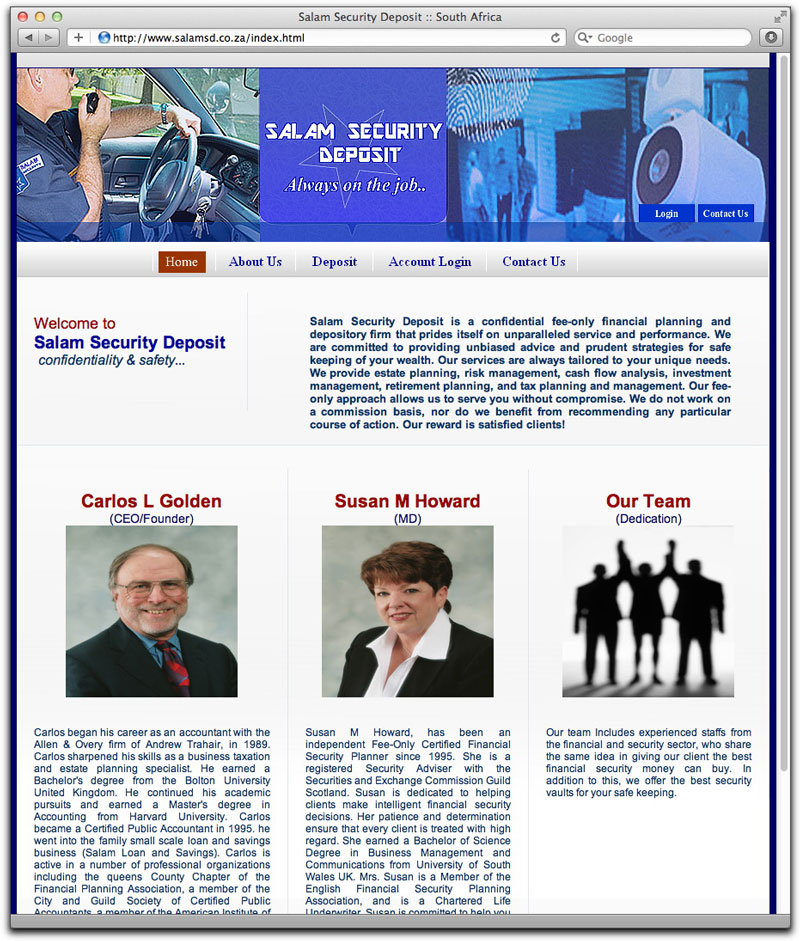 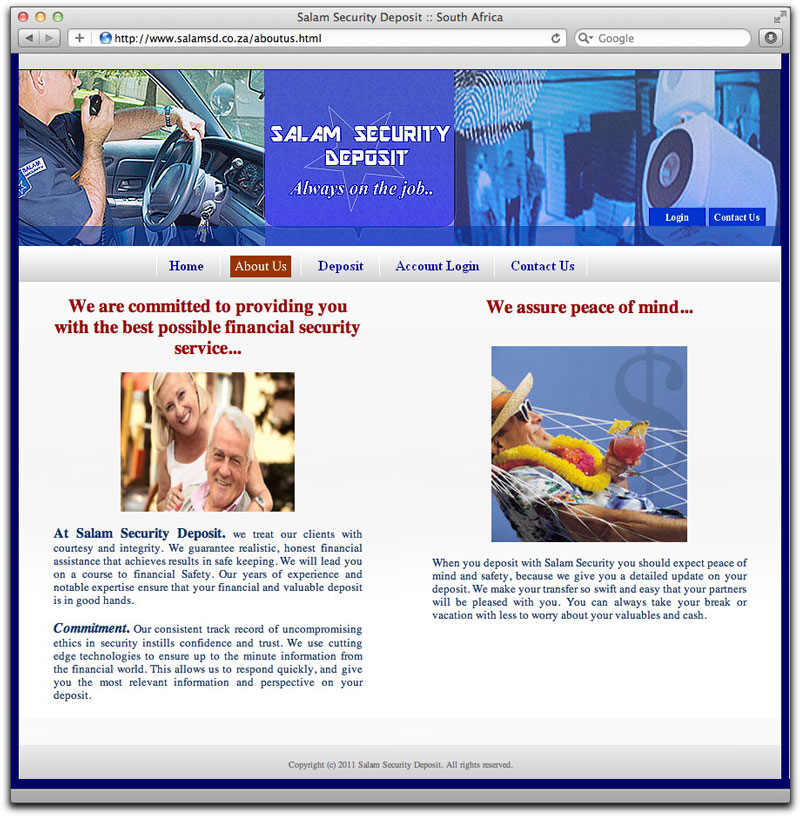 And then there's that image of the security officer at the upper left. Odd, isn't it, that the vehicle of this allegedly South African country is a left-hand drive in a country where right-hand drive prevails? Besides, what the hell does a home security guard have to do with bank deposits?

If you bother to read any of the text, it's boilerplate mumbo jumbo that one would use to play buzzword bingo. It says lots, but really says nothing.

Page design is something out of the 1990s. So is the Dreamweaver code.

Finally, what's the likelihood that someone named Golden would found a firm with a distinctly Arabic name? Shalom, maybe, but not Salam.

Among the other things I do with a suspicious web site is check the domain registration. That's where I got another laugh. The registration records begins thusly:

Oops! It appears that since they opened the domain earlier this month, they have yet to pay for the registration. Not too good for a "financial planning and depository firm that prides itself on unparalleled service and performance." Maybe the 50 Rand fee (just over 6 U.S. bucks) is too much for the firm to handle or they lost the combination to the vault.

So, our little 419 scammer exerted a bit more energy than most. Unfortunately, the result is poor. As, I hope, will be the response to his con game.